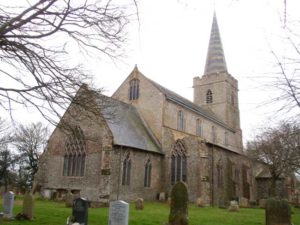 Pevsner describes this Grade I church as “the best church by far in the area”.
The building, that consists of a chancel, nave, with north and south aisles, and a west tower and north porch, predominantly dates from fourteenth and fifteenth centuries and is constructed of flint with limestone dressings and slate, lead and stainless steel roof coverings.
The original clerestorey and nave arcade and chancel arch interestingly combine features of both periods although in about 1400 the clerestorey was rebuilt and the original round windows blocked, the stone surrounds still being visible.
The tower also consists of decorated work to belfry level, with a perpendicular belfry and parapet that until the nineteenth century had a curious lead covered lantern that was replaced by the slate covered spire in 1873.
Inside the church the hammer beam roof of the nave is particularly interesting with its tall wallposts and fine carved figures, that regrettably, due to the Reformation, were defaced with vicious thoroughness with many of the paintings on the rood screen.
The mediaeval rood screen, the parclose screens and benches are also particularly fine. The visible wall paintings also date from the mediaeval period and the early seventeenth century.
The overall impression of this church is one of exceptionally fine quality which must make it one of the more important church buildings in Norfolk and East Anglia.
In 2003 an oak wall brace fell from the north side of the nave roof and a report, prepared from an emergency scaffolding, identified extensive beetle activity and deterioration. The south aisle roof also leaked, and was in a poor condition, and the surface water drains totally inadequate causing green algae to colonise the brick floors and deathwatch beetle to attack the parclose screens and nave pews.
Following an application to English Heritage for grant aid scaffolding was erected throughout the nave for a full inspection. This provided an opportunity for Dan Cruickshank in January 2006, and his BBC film crew, to have access to the defaced figures of the nave roof for the making of their documentary showing how the Modernist gained knowledge from the past.
English Heritage inspections also allowed a detailed inspection of the south aisle roof and the drainage system, and both areas were subsequently included in a contract to repair the nave roof.
Repair work commence with the nave roof that involved exposing the structural timbers and making MDF templates for each of the hammer beam connections, a time consuming and an intricate process. In assessing the significance of the mediaeval roof and analysing the structural defects a number of repairs were considered from traditional splice repairs to flitch plates and resin repairs. However the decision to use purpose made stainless steel brackets was taken because the new bespoke brackets would maximise the retention of the original timberwork, repairs could be carried out in situ, reducing disturbance to adjacent fabric, and the repairs were totally reversible. The brackets could also be adapted to overcome a number of structural issues including reinstating the bearing capacity on the walltops, reinforcing connections, and reintroducing bracing and strengthening to the hammer beams. They are also almost completely concealed from ground level.
While access was available to the nave roof a wall paintings conservator secured the bulging plasterwork on the east nave wall, above the chancel arch, and undertook conservation work on the wall paintings.
The English Heritage grant also allowed for the south aisle roof to be completely repaired and releaded and the drainage system relaid which included improving conditions around the perimeter walls of the church.
Because of its historical background the church has had many visitors over the years. In the past the church has held a Music in Country Church concert in the presence of HRH The Prince of Wales. The church was also the setting for a marriage for the grandmother in the TV series ‘Allo Allo’. 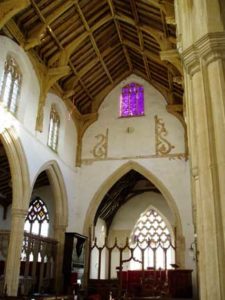 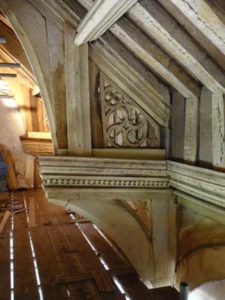 In 2010 the church was awarded the ‘Betjeman Award’ by The Society for the Protection of Ancient Buildings in recognition of exemplary repairs to a place of worship in the UK. In September 2010 it was rededicated by the Bishop of Norwich.
Many thanks to Ruth Blackman for this article
This website uses cookies to improve your experience. We'll assume you're ok with this, but you can opt-out if you wish.Accept Read More
Privacy & Cookies Policy
Necessary Always Enabled